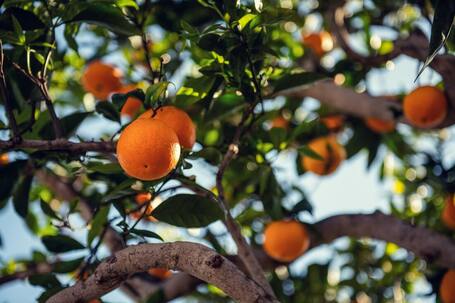 In Judaism God is the sole creator of the universe and with it also the Earth and all its inhabitants. All of Creation praises God, who governs and sustains nature. Through the observation of nature, one cannot help but notice the presence of order and wise design manifested in a world where nothing is superfluous.

Because humans were created on the sixth day of the Creation, they are often regarded as superior to other animals. This idea also stems from the interpretation of God’s first commandment to humans: “replenish the earth … and have dominion over it” (Genesis 1:28). However, other interpreters believe that humans have a responsible stewardship over God’s Creation and should treat it carefully and with compassion. The Torah points out that humans should take care of other species and cultivate and preserve the Earth. The commandment to give dignity to all things created by God thus also prescribes sensitivity towards all creatures and our planet.

We find concrete examples of ecological concern in Jewish law (halakhah), which provides protection for fruit trees even during times of war and debates over damage caused by smoke. Jewish teachings also give many examples of the need to treat farm animals well. They should always be allowed to eat well while they work and to rest on the Sabbath.

(Fruit) Trees even have their own day of celebration: Tu BiShvat, the New Year of the Trees or Israeli Arbor Day. Tu BiShvat once indicated the end of winter and the beginning of the ideal planting period in Israel. Today it is connected with different environmental actions and celebrated with festive ceremonies with meals featuring a variety of fruits.

To keep these fruits on our plates, we need bees and other pollinators - so now more on their role in Judaism.

In Hebrew, “bee” is translated with Deborah, which is the name of two important women: the nurse of the matriarch Rebecca and the prophetess Deborah (1107-1067BCE). Deborah was the fourth Judge of pre-monarchic Israel and the only women among them.

Since beekeeping is not described in the Torah, honey was long understood to mean date syrup or honey of wild honeybees. However, archaeological findings of beehives in the Jordan Valley that are more than 3,000 years old challenge these interpretations. One thing is clear: the Torah describes wild honey as one of the finest foods, which also plays an important role in the story of Samson’s riddle:

The sweetness of honey 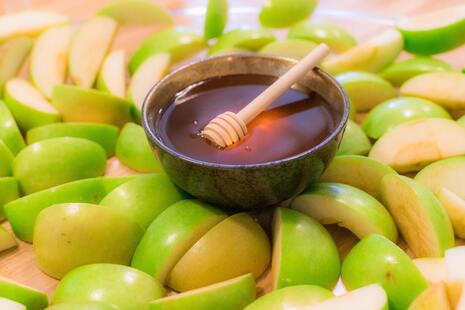 The natural sweetness of honey is used to symbolize the sweet aspects of life and is eaten in pastries and on various holidays, such as Rosh Hashana, the Jewish New Year. Celebrants dip apple slices into honey followed by the recitation of a prayer for a good and sweet year. The honey here symbolizes the hope for a happy and prosperous new year. In the Midrash (the biblical commentary on the Scriptures), honey is a metaphor for the sweetness and wisdom of the Torah. For example, in King Solomon’s verse, “honey and milk under your tongue”, honey represents the sweetness of the words of the Torah. Accordingly, honey and milk are also consumed on the Shavout holiday, celebrating the Giving of the Torah. The Talmud also provides several hints on the positive effects of honey, such as restoring vision or improving memory.

The bee itself belongs to the class of unclean insects, so normally the rule “that which comes from something which is tameh [non-kosher] is tameh,” (Bek. 1:2) should apply to honey. However, rabbis claimed that honey is only stored in the bee’s body and is therefore not a product of the bee itself. Thus, honey and other bee products are considered kosher.