Webinar and Special Issue Article on Bees for Peace

Get updated on the latest research related to Bees for Peace!  Director Carrie B. Dohe gave a talk on Bees for Peace in Germany and Canada on May 31, 2021, for t the University of Toronto School of the Environment Summer Webinar Series.

You can also read her “Special Issue Introduction: Bees and Honey in Religions,” in the "Bees and Honey in Religions" issue she guest-edited for the Journal of the Study of Religion, Nature and Culture 14.3 (2020): 315-323. and “Mobilizing Faith Communities for Bee Preservation: An Analysis of Bees for Peace”(ibid. 412-438), her  analysis of the pilot phase of Bees for Peace in Cologne, Germany.
​

On August 17, 2020, Bees for Peace was awarded recognition as an Official Project of the UN Decade on Biodiversity, an honour it will carry for two years, 2020-2022. The ceremony took place outside at Christ Church in City Garden, Cologne, Germany, to respect COVID-19 protective measures. Participants also received Bees for Peace protective masks. 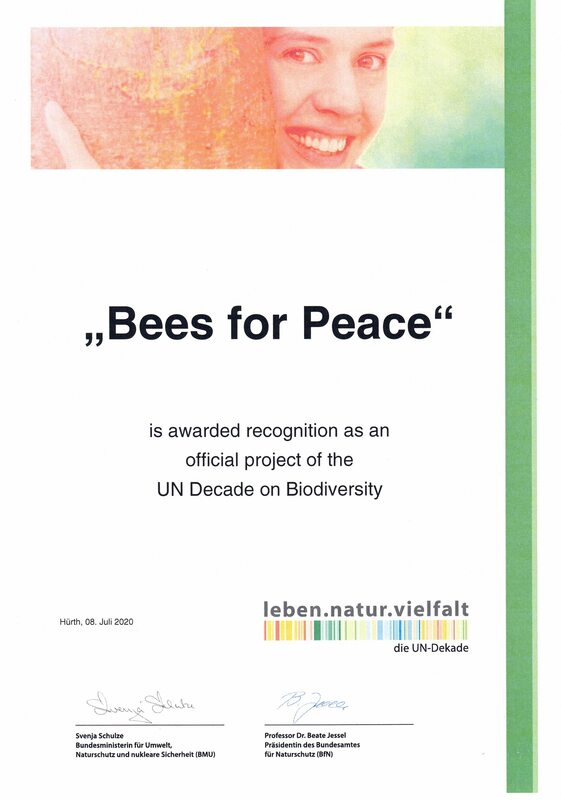 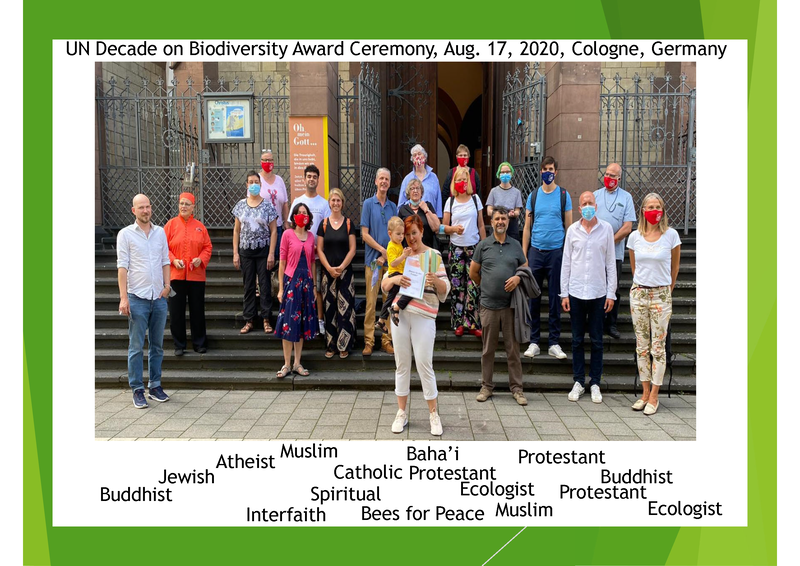 How does Bees for Peace accomplish its aims?

Bees for Peace has thus far offered workshops on wild bee habitats, built bee hotels that suit bees’ biological requirements, organized interfaith actions to create planter boxes for flowering bee feeding sites to be positioned on the grounds of houses of worship, held roundtable discussions on pollinator protection involving people of faith and trained conservationists, and created special events for different age groups, from young to old. Bees for Peace has also inspired faith leaders to preach on nature conservation as grounded in scriptural sources, then lead their communities outside to sow seeds and plant flowers for bees on the grounds of their houses of worship.

Protecting Pollinators Through the Web of Life

Bees for Peace collaborated with the Jesuit Forum and the MaryWard Center to discuss pollinator protection with Doug Anderson (Creative Director, Invert Media; Indigenous Medicine Gardener) and Junaid Khan (Ecologist & Researcher of Pollinator Partnership Canada). The connection of humans with our environment and the role of pollinator protection in that connection was explored in depth. The conversation was moderated by Carrie Dohe, Executive Director or Bees for Peace. In order to engage the audience,  we gave a raffle winner a gift basket and everyone's bee knowledge was tested with a game!
Junaid (left), Carrie (center), and Doug (right) discuss pollinator protection in front of an audience of students and members of the Jesuit Forum and MaryWard Center!

Below are actions related to Bees for Peace or bee protection during the Interfaith Week for Nature Conservation in Cologne and Region. These events demonstrate a spectrum of activities for various age groups and communities, engaging members of various faiths and at times bringing them together in collective efforts.

2018
Our first event was an interfaith (Baha’i, Buddhist and Christian) springtime action to build planter boxes.  It was announced by WWF Youth, the Nature Conservation and Environmentalism Academy of North Rhein/Westphalia,
and HonigConnection.

Shortly thereafter, a raised bed was built at the Catholic Holy Three Kings Retirement Home in Cologne to the delight of its residents. Then the Christ Church in Cologne’s City Garden held a political church service and flower-seed planting.
​The 2018 Cologne Interfaith Week for Nature Conservation in September offered numerous events where visitors could learn about bees and bee protection:
2019
During the 2019 Cologne Interfaith Week for Nature Conservation, the Central Mosque of DITIB, Germany’s largest Muslim organization, held a sermon in all of its mosque communities on Islam and nature conservation, reaching possibly 200,000 people, and hosted a bee-friendly community flower-planting.

The Catholic Rainer helps construct a raised bed for another religious community; The nature conservationist Harry (left) and the Catholic social worker and trained carpenter Bernd (right) provide the professional guidance on how to construct the planters and nesting boxes. 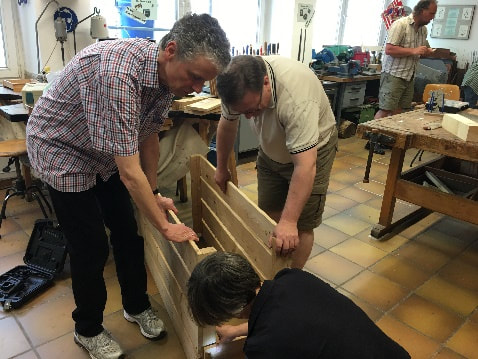 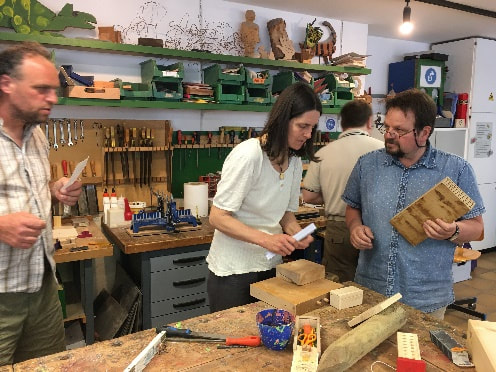 The participating social workers used the action to educate their young clients on bees and bee protection in the week preceding the event, by offering a honey-tasting, by planting flowers and by making desserts out of honey. The interior courtyard of the Shambhala Center of Cologne and home to a beautiful Bees for Peace flowerbed.

A raised bed was built at the Catholic Holy Three Kings (Heilige Drei Könige) Retirement Home in Cologne. The day was entertaining for all participants: the elders enjoyed sitting in the courtyard on the sunny day the work took place, and afterward regaled the nature conservationist Harry with fascinating stories from their life histories.

The Protestant Christ Church (Christuskirche) in Cologne embraced the care of Creation practically and organized a “political worship service” for Bees for Peace (Bienen für den Frieden). Pastor Christoph Rollbühler gave an inspiring sermon, Stephanie Breil and Iris Pinkepank of HonigConnection explained how to protect bees and Carrie Dohe  encouraged the laity to include Creation in their Christian practice.
Participants in the autumnal bike pilgrimage for Bees for Peace learned about developments at the Christ Church. Churches have a lot of space where bee-friendly flowers can be planted, such as (here) the space between driveways.

The Market of Diversity has been held twice in Cologne at the opening events of the Interfaith Week for Nature Conservation in Cologne and Region 2018 and 2019. It highlights the environmentalist projects run by religious communities and environmentalist groups that partner with them. Seventeen organizations offered information about their programs in the Sikh, Baha’i, Buddhist, Catholic and Protestant faiths. Present were also Friends of the Earth, HonigConnection and the city’s waste removal department. Shown here are just some of the stands.

Bees und Honey in the Religions and in Our Contemporary World:
​An Interdisciplinary Conference in English and German

The Qur’an contains a  verse in chapter 16 which is called “The Bees” (pronounced An-Naḥl, in Arabic الْنَّحْل):
“And your Lord inspired the bee, saying: 'Take your habitations in the mountains and in the trees and in what they erect. Then, eat of all fruits, and follow the ways of your Lord made easy (for you).' There comes forth from their bellies, a drink of varying color wherein is healing for humans. Verily, in this is indeed a sign for people who think.”
The exact verse that mentions the (female) bees has sixteen words, which together are made up of sixteen different letters. Female bees have sixteen pairs of chromosomes; males have sixteen single chromosomes. This mysterious and delightful correspondence between Qur’anic verse and bee biology may give many people pause to ponder the meaning of the sign.

The Central Mosque in Cologne of DITIB (Diyanet İşleri Türk İslam Birliği)​, a Turkish-cultural Muslim organization and Germany’s largest Muslim Association, invited Friends of the Earth to inform mosque visitors about bees and insect protection through its mobile environment bus, which offers magnifiers to examine insects up close. Visitors also had the opportunity to build insect hotels. Finally, an exhibit of children’s art was on display, featuring environmentalist topics raised during a Qur’an lesson.
Drawings of children from a Qu’ran lesson on nature and environment 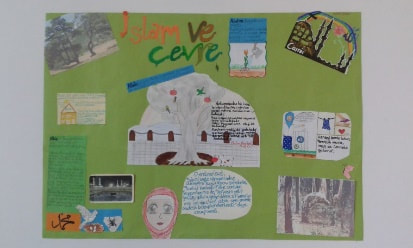 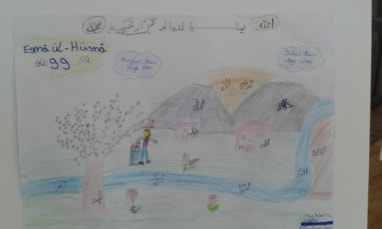 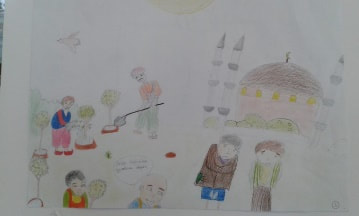 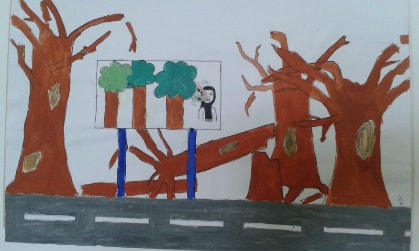 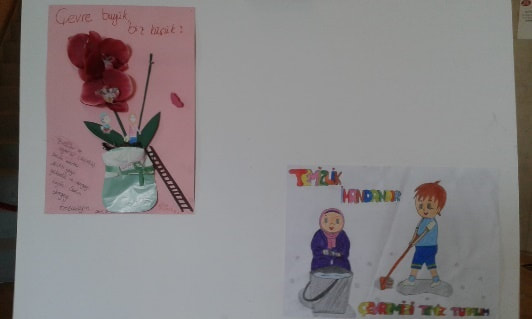 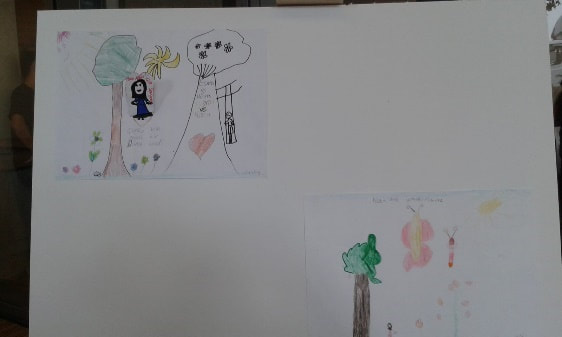 Bicycle Pilgrimage for Bees for Peace

In the inner-city area of Cologne, various raised beds for bees have been set up to draw attention to the fact that our biodiversity, including especially bees, is very much threatened. Therefore, this pilgrimage drew attention to what we can all do to preserve diversity by visiting these sites and learning about hands-on projects. Some of the stops included rooftop gardens set up by HonigConnection; the Shambala Buddhist Community; the Christ Church; the DITIB Central Mosque; Friends of the Earth Cologne; and, seen here, the Saint Agnes Church, the grounds of which are being converted into an oasis for local plants and animals by a volunteer from NABU, the Nature Conservancy Association of Germany. The Pilgrimage ended at the Baha’i Community Center, arriving in time for dinner and a presentation on what Baha’is around the world are doing to preserve our Earth.

The Protestant Kartause Family Center held a picnic open to all participants of the Interfaith Week for Nature Conservation in Cologne and Region. It received produce for the picnic from Foodsharing. Picnic participants gathered together at tables, chatting amiably while chopping vegetables to be grilled. They were encouraged to bring a flowerpot to the picnic, inscribed with the name of their religious community or organization. These flowerpots were planted with the seeds of bee-friendly flowers and exchanged, helping people from different communities get to know one another.